In many hours of work and frustration I have learned that page segmentation and character models have a strong influence on the result of OCR. However, I always underestimated the effects of the initial step – the binarization.

Now I have looked at the binarization step more closely. Starting material are rather poor scans  of the Austrian-Hungarian casualty lists. The scans themselves are not so bad. However, the paper is more than 100 years old and yellowed. There is a cutout:

Instead of looking at the binarization result directly or applying any kind of metric to it, I deceided to measure the final OCR result, i.e. the character accuracy. To avoid any problems during page segmentation I cut the two-column scans in half manually. Additionally I counted the detected lines. Since I used the same ground truth data for all measurements a missing/additional line would immediately be noticed by a very high error rate.

Typically ocropus-nlbin is used to create a bi-tonal image. As you can see the result is not very promissing. Maybe characters are eroded.

After running the page segmentation ocropus-gpagesep without additional parameters I noticed that some characters/words were eroded. By using the debug mode (-d option) you can see these holes in the line seeds:

With the --usegauss option that switches to a Gaussian kernel instead of a uniform kernel that problem can be avoided. But there was still another problem. Occasionally two lines were merged into one image. I also investiaged that problem using the debug mode. This is the relevant section: 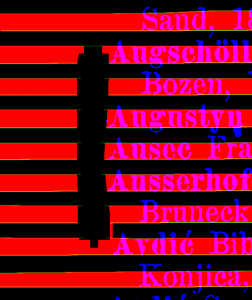 Now the page separation works without problems and I can run the character prediction using my trained character model for the casualty lists.

As a different approach for binarization I have used ScanTailor, a program that has served me well in the past optimizing scans. By default ScanTailtor produces a 600dpi bi-tonal image from 300dpi gayscale input. It also allows the use the configure the threshold used for binarization. Although values from -50 to +50 are possible, for this example only values between 0 and +40 seem reasonable.

Finally, here are the results of my experiments: 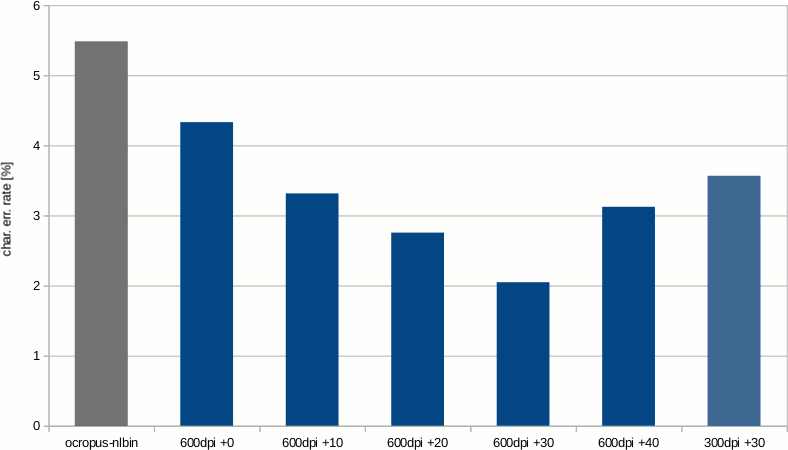 The bars in blue show the results of the ScanTailor binarization. The most right bar shows the effect the resolution of the bi-tonal image has. It is a 300dpi version with the best threshold setting determined for the 600dpi images.

As you can see, the binarization method used has a significant influence on the recognition quality. In my case the character recognition error is reduced by more than 60%.

You can find all images and ground truth data for this experiment on GitHub: https://github.com/jze/ocropus-binarization-experiment